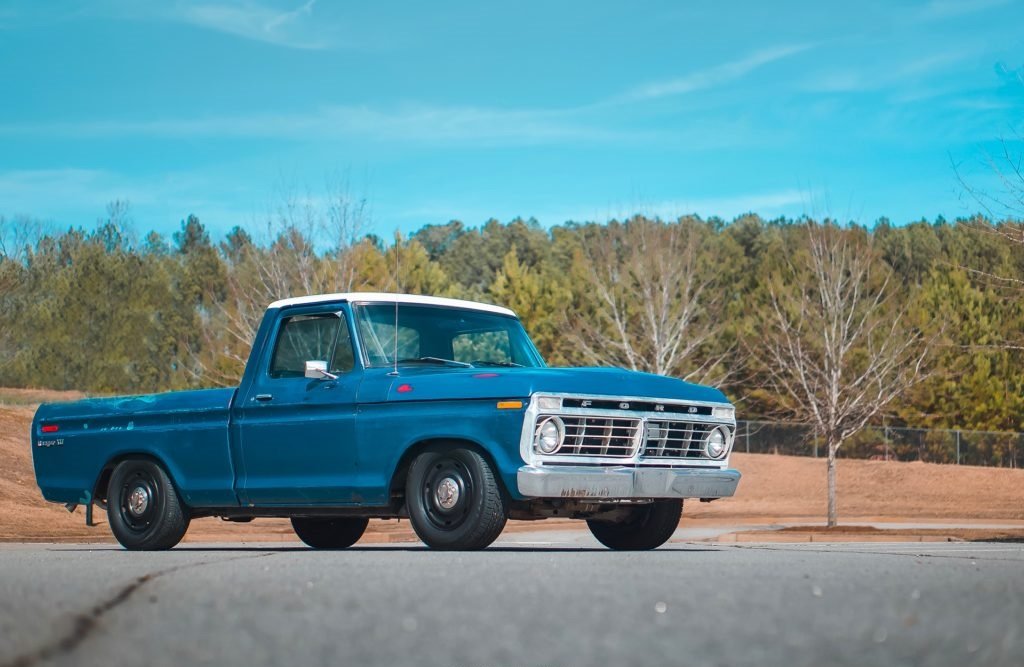 Hey folks. It’s Free Flash Fiction Wednesday yet again, and this week its: YOURS TRULY! If you fell out of the rotation when the Covid Chronicles stopped, we’re glad you’re back. We’ve slowed down a bit, with the still-somewhat-quarantined-and-still-just-as-crazy authors doing one story per week. If you missed the first three, please check out Joe Courtemanche’s story, Mulroney’s Mariachis, from July 8; Jamie Greening’s, Jack and Robin Go Swimming, from July 15; and Kathy Kexel’s , The Guardians, from July 23.

No money expected. It’s all free for you and always will be. If you are so inclined, please visit our various websites to see what merch we DO have for sale. Regardless, we hope you enjoy our stories, and we hope to see you back next week. Until then, here’s …

A baby blue, 1974 Ford pickup truck drives past the parking lot at James Teague High school in Greenwoods, Ohio, blocks around once, then parks in the lot facing the ball fields and the disused tennis courts.  The Mill Creek flows just beyond the fields. Seven thirty on a late spring evening. Sunset in Southwestern Ohio. The crickets sing to the oncoming night with a red sun swelling just above the horizon, casting an amber hue on the present and long shadows into the steadily accumulating past.

And old man lights a cigarette, reaches his wrinkled hand behind the steering wheel, and turns the truck off. He sits back and sighs.

A young, thin man with dirty blond hair and a large bruise on his forehead slumps in the seat next to him.

The truck’s passenger stirs, unsure of his surroundings. His eyes register the dashboard, the windshield, and the fading yellow-orange dot of the sun beyond, then turns to see the old man in the driver’s seat, pointing a gun at him.

His eyes flash open. He struggles, but the too-tightened seat belt holds him back. Several passes of thick rope bind his hands to his legs in tight knots. Hogtied is what some in the rural parts of Southerwestern Ohio might have called it, but the passenger isn’t concerned about the taxonomy of binding techniques at the moment. It’s hard to be when you have a gun in your face. Anyway, his Boy Scout days have long since passed.

“Mmmm Mrrrmmmph!” the passenger mumbles, his mouth filled with gauze and covered in duct tape.  He coughs as the cigarette smoke fills the truck’s cabin.

“Don’t worry, son,” the old man says in a slow methodical cadence. “I’ll take off that tape off so we can speak, but I need to know you won’t scream.”

The passenger sits back, stops protesting. He is the perfect picture of calm; all except his eyes.

“Good,” The old man says. He takes off the tape, and they stare at each other in silence, their faces burnt orange from the sunset.

“You already know why you’re here,” the old man says. “I just need to hear you say it.”

The passenger stammers, frightened. “Sir, I don’t know what you’re talking about. I … I … I think there’s been some kind of mistake.”

“Shh Shh Shh Shh.” The old man presses the gun against the passenger’s temple. The young man calms down again.

Through the trucks windshield, we can see kids playing in the park next to the baseball fields. Spring in Ohio is slow in coming but, once it gets here, it hits will full force. Everyone comes out to enjoy the warmth after a long winter. Especially the kids.

“She was fifteen,” the old man begins, “but I knew her since she was born. Her momma had a tough pregnancy: pre-eclampsia, gestational diabetes. All that. We were scared she wouldn’t make it, but she did. My daughters are all strong women, why should my granddaughter be any different?”

“She took this world by storm. When she was little, she was a firebolt with big, red hair and a wide, beautiful smile. She smiled with her whole face. Eyes lit up like the sun comin over the hills to light up the valley. Magnificent!”

“She had a certain way of looking at you. Unafraid. So full of LIFE. Like she was just waitin’ for the next adventure to knock on her door, take her by the hand, and show her something new.”

The old man pauses, lowers his head. “She was too trusting. She got that from me.”

“She went missing in August.”

The young man started to squirm, testing for weak spots in the rope, hoping the old man does not notice. He is unsuccessful in both endeavors.

“They found her body in the Mill Creek, just over there beyond the football field. See that little break in the trees, just past where all the kids are playing? Look over there.”

The passenger does not look. He stares at the old man. The old man stares back.

“Police said someone caved her head in with one of the rocks from the creekbed. But, before that, they said she had been … violated. Many, many times.”

The old man lights another cigarette.

“They were unable to get DNA samples, and there was no evidence to go on. But, people tell stories. Rumors have a way of spreading, ‘specially in a little town like this. Those rumors led me to you. And now, here we are.”

“Mister,” the young man says, “you got the wrong man. I don’t know nothin’ about none of that. I haven’t touched any little girls. I got a wife and two kids of my own at home. I go to church. That ain’t me.”

“Hush now,” the old man says. “I been watching you for a while. Your wife left you two weeks ago. Took the kids, too. Probably a good thing the way you are. As for church? You ain’t been. Reverend Mordecai over at Westside Christian says he remembers you from high school, but he hasn’t seen you in years. He told me to let know you he’s praying for you. If I see you, that is.”

The old man takes a drag from his cigarette. “Looks like he didn’t pray enough.”

“No, son. This is your chance to confess.”

“Sure. Confession is good for the soul! You and I already know it’s true. I just need to hear you say it. But I don’t have all day. So I’m going to count to five. If I get all the way to the end and I’m not satisfied with what you have to say, my friend here will take care of business for us.”

The young man struggles harder, but the ropes hold. “You’re crazy, man. I didn’t do nothin’.”

“I figured you’d say that, so I brought along some extra motivation. Look out there on the soccer field. See those kids playing?”

Two middle school girls soccer teams ran on the red sun drenched field, fighting tooth and nail to claim victor for their school. The Purple team scores a goal against the Red team. Half the crowd goes nuts.

The young man’s eyes grow wide and frantic. “That’s my daughter! What the hell? What did you do to my daughter?”

“Nothing, yet. But if I get to five, I’m going to shoot her first, to pay you back for taking my granddaughter. Then, it’s your turn.”

The old man levels the gun at the young man and waits patiently.

“You’re insane, you know that? I didn’t touch your granddaughter. I haven’t touched anyone. You can’t do this! I’m innocent! This is absolutely insane. I ain’t sayin’ nothin’. Nothin’.”

The young man starts screaming, pulling against his ropes so hard they draw blood from his wrists and left welts in his ankles and legs. “Help! This crazy old man wants to kill my daughter. He wants to kill me! Somebody Help!”

The young man bashes his head against the passenger side door and the window but nothing comes of it. The ropes are too tight. The window remains intact. The hog farmers of Ohio would be proud.

“I’m gonna kill you. You hear me? I’m gonna tear these ropes to shreds, then I’m gonna come over there and smash your head against the steering wheel till your skull caves in. I’m gonna laugh when I do it.”

“Interesting you put it like that,” the old man says. “My granddaughter died the same way. Did you laugh at her when you killed her? … Three.”

The young man hyperventilates, taking in deeps gasps of air in quick succession, but it isn’t enough.

“Nice try, buttercup. I don’t want a fake aplogy. I want the real thing.” The old man looks at the kids playing on the field, smiles, and returns his gaze to the young man in the passenger seat.

“You’re running out of time fast,” The old man says, shifting to point his gun at the kids running on the field. Someone scores a goal. The crowd cheers.

The young man’s heaves turn into sobs. He wails.

The old man waits, patiently. He smiles at the young man in agony, then turns his attention to the soccer field, pointing the gun at the players.

“How? Did you choose her or was she random.”

“Random,” the young man says. “I drove past the school on the way home from work one day. I have this white van. No windows. A painting van. I keep shackles and a mattress in the back. I’ve been doing this a long time. I didn’t mean to kill her. I never killed none of them before. But this one was…”

“She was strong,” the old man says.

“She fought back. Jumped out of the van and ran. It was dark by then, and she didn’t know where she was going. She slipped down the embankment next to the creek, tripped over a rock, knocked herself out a little.”

“If she hadn’t slipped, she might have made it, right?”

There is a tense quiet in the truck. The old man closes his eyes, picturing that scene, seeing his granddaughter jumping away and running to safety. The young man wonders what would have been – prison, perhaps; a life much different from what he planned. But a life, definitely, and the opportunity for something beyond.

Dreams of neverwhere. Wisps of forgotten memory carried away into the darkening spring air.

“But … I caught up to her. She screamed again, so I grabbed a rock and … and I finished her.” The young man lowers his head. “Is that enough?”

The game has ended. The players and their parents laugh, show each other pictures on their cell phones, tell stories. Then, get in their cars and slowly make their way out of the to the next thing. The sun slips over the horizon and night begins to unfurl across the Mill Creek, the back fields of James Teague High School, and the parking lot where a baby blue, 1974 Ford Pickup truck sits motionless.

“Thank you,” The young man says.

A shot rings out into the night. Three seconds later, another shot. Darkness overtakes the creek, the field, the truck, and the school. The truck does not move.

Outside, the crickets begin to sing.

Thanks for taking the time to read this story. Join us again next week for a new release from the Free Fiction Wednesday Club, where one of our award-winning authors will sneak into your brain and extract the things that move you, scare you, excite you, and make you feel love. While you wait, please chek out some of the other authors in our tribe. Joseph Courtemanche, Jamie Greening, Kathy Kexel, Derek Elkins, Rob Cely, and Dr. Paul J Bennett. Most of us have some sort of books and other things for sale. We’d appreciate your support if you’re willing.